This was the largest steam engine I had ever seen in service, and was the first and last time I saw 1218 run. You can click here to learn more about the 1218.

You'll note that this was another gray sky day. Seems like Mr. Blue Sky had most of the same days off that I did in those days.

In deference to the gray skies, most of this gallery has been replicated in black and white. It's more complimentary to the gray sky, and steam locomotives in general. The black and white emulates Kodak's Panatomic X film. It was so gray this day that I shot the originals on Kodachrome 200 slide film.

The Mail Pouch Barn at Attica Junction appeared in many photographs in the 1950's, as this line was originally owned by the Pennsylvania Railroad and it was one of the last bastions of Pennsy steam. Things had grown in somewhat since the 1950's - probably because there was no ash to kill the vegetation - so it was it a tight shot in 1987. I checked Google Earth before posting, and not surprisingly, it's gone. 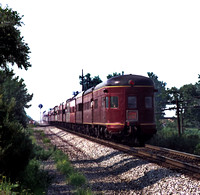 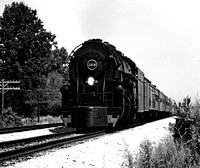 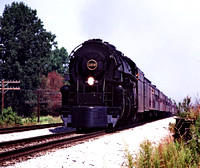