41 photos
Bodie State Historic Park is a genuine California gold-mining ghost town. Visitors can walk down the deserted streets of a town that once had a population of nearly 10,000 people. The town is named for Waterman S. Body (William Bodey), who had discovered small amounts of gold in hills north of Mono Lake. In 1875, a mine cave-in revealed pay dirt, which led to purchase of the mine by the Standard Company in 1877. People flocked to Bodie and transformed it from a town of a few dozen to a boomtown.

Only a small part of the town survives, preserved in a state of "arrested decay." Interiors remain as they were left and stocked with goods. Designated as a National Historic Site and a State Historic Park in 1962, the remains of Bodie are being preserved in a state of "arrested decay". Today this once thriving mining camp is visited by tourists, howling winds and an occasional ghost.

Beyond the words, it's something to see if you find yourself on US 395 between Carson City, NV and Bishop, CA. It's surreal... As one of the Rangers said, many people left some or most of their belongings when it was time to leave Bodie - it was easier and cheaper than hauling things out.

I thought about making this a black and white gallery to suit my mood. After internal deliberations with myself, I left the images in color. Should you want an image on your wall of Bodie, you can leave it in color, or change it to black & white or sepia to suit your taste and mood.

I also contemplated making some corrections for perspective and lens distortion, and then, when I realized that there probably isn't a square corner or a vertical plane left in many of the buildings, I gave up! 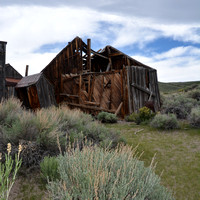 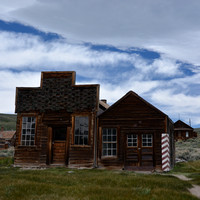 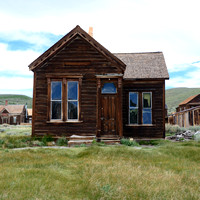 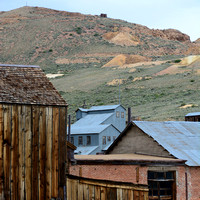 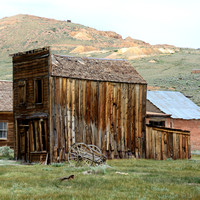